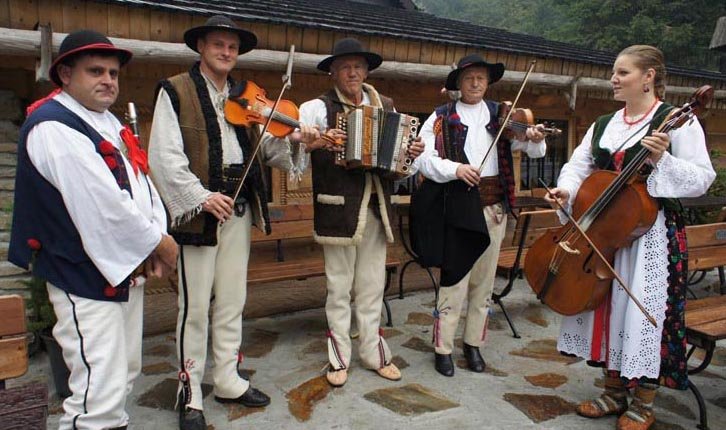 It is a dialect of the inhabitants of the Carpathians, spoken by them since the 17th century.

It is one of the most characteristic elements of Podhale culture, which you can quickly tell if you are dealing with a real highlander. The dialect is spoken every day, not only at home, but also at work or school.Podhale dialect is a dialect of the Polish language, containing many old Polish archaisms as well as Slovak, Hungarian and Balkan accretions and borrowings. The most characteristic elements of the dialect are:- smudging, that is, replacing the letters “sz”, “cz” and “ż” with the letters “s”, “c”, “z”,- pronouncing the vowel “o” as “ł”, especially at the beginning of words (e.g. salcypek)- “ch” pronounced as “k” (e.g. kkć)- stress on the first syllable and not on the penultimate one, as in Polish.

Highlander dialect is just such an element that you can’t write much about – it’s best to listen to it yourself. While in Podhale, you can certainly hear it often, so it is worth paying attention to the above-mentioned characteristics.

It is another element of the intangible highlander culture. It has changed a lot over the years, but its traditional and characteristic elements are still preserved.

In the old days, even before the discovery of Zakopane by crowds of tourists, highlander music was usually of anonymous authorship and was created spontaneously, as if spontaneously. It often resulted from everyday life and talked about what was closest and most precious to highlanders, contained love themes, funny chants, talked about love for the mountains or gangs of robbers. Instrumental music and singing were present at family celebrations, holidays and special events, they were an inseparable and important element of cultural life. Various rituals and traditions are associated with music, e.g. matchmakers chants before a wedding or harvest songs.

Highlander music was passed down from generation to generation, without musical notation, in its original form, “live”. This can be seen in the subtle differences of the same songs and melodies in different regions of Podhale.

– drafted, sung and played at a fast pace, they are characterized by a jerky rhythm- marching, mainly for robber dancing, usually of Hungarian and Slovak origin

– a primist who plays a leading melody on a violin or goose (a kind of folk violin), he can replace any musician in the ensemble,

– secundists (usually two), i.e. the second violin, complementing the primist’s melody. The second player together with the bass form the rhythm section, so he should be able to replace the bassist.

– a bass player who plays the bass, an instrument similar to a small double bass, traditionally made of ash or spruce wood, the strings of which are made of sheep’s intestines.

Most Podhale people have beautiful, strong voices. Highlander songs are performed in polyphonic form, often enriched with shouts. They are sung by both women and men.